Posted by Mark 6 years ago 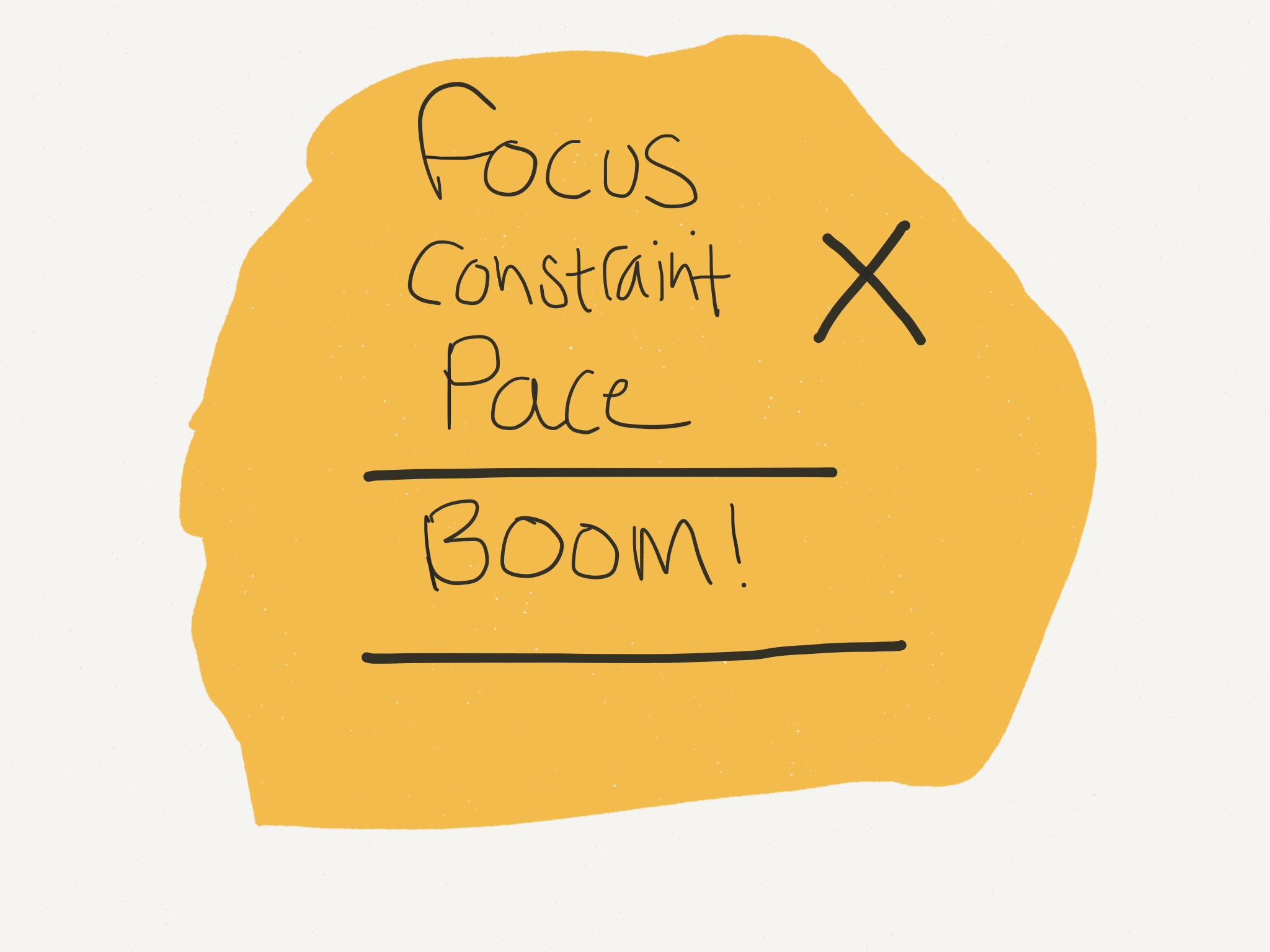 Heard this rallying cry lately? Chances are your boss has just said it. It’s become a mantra for those “stuck”. Stuck as they see others zoom past them, as they see competitors appear overnight, like cress. Start-ups are dynamic, exciting, and so very now. Many larger companies hunger for that way of thinking, doing and being. But do we know what we’re really asking for?

At Rebel Cell we spend a lot of time with organisations that are desperate to be like a start-up. Our question back to them is always: Why? What aren’t you doing at the moment that you want to be doing? Often it’s trying to recreate or re-imagine their original rebel spirit, the arrogance to try something radical, do it fast, make trouble. Make a difference.

But the truth is, they don’t and shouldn't want to replicate all the behaviours of a start-up. We spent plenty of time talking to, and working with start-ups. There are many things to admire (which we’ll come to in a second), but many things to avoid, most notably: A combustion engine of in-fighting, disorganisation, politics, and unfulfilled expectations. Some groovy table-tennis tables though.

Hang on, that’s big business (apart from the table tennis). No wait, it’s a start-up...

We believe there are only three characteristics that really matter. We’ve found that the best start-ups (and some great larger businesses) all share them. When combined they make a formidable success formula. We work to build these more effective characteristics of a start-up into big business.

A laser-like focus on what you’re making, and why you’re doing it. Obsession with your product, and a desperation (and belief) to make it world beating.

Extreme focus comes from obsession, an obsession that matters. This obsession has a number of drivers:

1 Unwavering belief. In what you're creating and why it’s important.

It takes balls and belief to turn down $1bn from Yahoo, but that’s what Mark Zuckerberg did in 2006. He's now worth about $13.3 billion and 1000s of his employees are millionaires. His belief in his product, culture and goal was tremendous. It would have been easy to take the cash. Investors love corporate spin-offs because they’re more focused than their more diversified parent companies.

We ask: Are you building a product, or just a nice feature? Are you looking for a quick buck or a great product?

2 Fear and urgency. The flames of defeat or the clouds of glory spurring you on.

When we asked Simon Moss, CEO of ImageBrief.com what motivated him to start ImageBrief he replied “I had a near death experience and, lying in my hospital bed, realised I was wasting my life. I wanted to create something brilliant. That spurs me on.” Having a burning platform, a sense of urgency to create great things, is a fantastic motivator. Why settle for average? Average is a crowded market. It’s easier to be brilliant than average.

We ask: Where’s the motivation for you and your team? Where’s your skin in the game?

3 Unfair advantage. Find yours and exploit it.

Cardigan in Wales used to be home to the biggest jeans factory in Britain, employing 400 in a town of 4,000 people. That’s 10% of the community being experts in making one thing. So where do you start if you want to make the best jeans in the world? You start in the town with an unfair advantage. That’s what Dave Hieat did when he started Hiut Denim with his wife Claire.

We ask: What can you do that no-one else can? What are your strengths?

4 Do one thing, brilliantly

When we asked Jessie Hertzberg (former COO at Squarespace.com) what his top tip for success was his answer was quite simple.

“Be religious about doing one thing brilliantly, not two things really well. You can’t be good at two things before you’re great at one. The hardest thing is to say no, but in doing so you focus on building something amazing. "

We ask: Are you focused on one thing before you look to diversify? Is this making the product stronger or weaker? If not, kill it.

A rebel mindset of using a scarcity of resource to unlock inventiveness and ingenuity.

“Getting this signed off and to market will take us 2 years!”, is an all too familiar challenge from our big business partners. However, we take great delight in reminding them that Instagram was only 15 months old when it was bought by Facebook for $1bn.

We ask: How would we do this if we only had 1 day to build it?

“We can’t afford to develop and test this alongside our existing portfolio.” If you’re trying a traditional bells and whistles approach, you’re probably right. But great things can come from innovation on a shoe-string. That’s where great start-ups excel. The Dollar Shave Club began with a great idea (razor blades sent to your door for prices that didn’t necessitate you selling a kidney) and a simple and very funny film that went viral. From running it from Mike’s living room where Mike built the website, answered calls, packed the boxes and made the coffee the video resulted in investment of $19 million straight off. It has now raised over $150 million in total and is valued at $500 million. All of this on the back of a conversation at a party and a funny film.

Alice Bentnick, Co-founder of London based incubator programme Entrepreneur First says: "We have found some of the best innovations to come out of start-ups are new approaches to things that had originally been thought to cost thousands of pounds. Working out solutions to these things can provide an interesting competitive advantage."

We ask: What if we only had £500 to make a working prototype to test with consumers?

“We can’t compete with Facebook because we’ve only got 13 people here” is something that Instagram CEO Kevin Systrom never said, because clearly 13 Davids were enough to be snapped up by one big Goliath. You no longer need an employed workforce to delver you a world-class supply chain. You network, outsource and collaborate. If your product is brilliant, it will sell. The gap between professional and amateur has vanished.

We ask: What if we had to do this ourselves, TODAY?

The ability to build, experiment, learn and pivot at break-neck speed. Getting to a minimum ‘loveable’ product faster than your competitors.

In a world where copying is normal; where patents are expensive and, weirdly, exposing; where two weeks can be the difference between well-timed and late: speed is your friend. If you towing a trailer and it wobbles, it’s better to speed up and pull through than hit the brakes. Speed is your friend.

GE have just commissioned a ‘Fastworks’ programme to train 80 ‘Lean Start-up’ coaches, to coach and facilitate 100 Fastworks projects globally. They know that the ability to move with the agility and speed of a start-up is critical to inventing something breakthrough. More here https://hbr.org/2014/04/how-ge-applies-lean-startup-practices/.

One of our colleagues has been trying to launch a new drinks brand for his client but has been slowed down by their, well rationalised, 'proof of scalability' driven culture. Consequently what could have been a six month market ready start-up has been a three year process. If this was a stand-alone start-up would we be asking that question?

We ask: Can we remove barriers from our critical pathway?

Don’t seek out mistakes and failures, that would be crazy; but if they are going to happen make them happen fast. Learn from them, don't dwell on them.

Spotify have an experimentation principle of "Fail fast, with a limited blast radius” which gives them the ability to do lots of experiments, with a limited amount of guinea pig users, without sinking the ship. When they do have bigger bloopers they run 'post mortem’ meetings, which are there to fix the process not assign blame. You can see how their engineering culture works here (https://vimeo.com/85490944)

We ask: How do we create a protected space to accelerate experiments in?

Nike vs Adidas knitted shoe. These guys own sportswear. But which one do you think feels more innovative? They both are but one is faster than the other. Both were developing a knitted shoe. One tested, tested, tested and tested some more. One rushed it out and now owns this space despite the fact that the first version was a bit shit. It was a land grab; it built on their reputation for new, for innovation, for risk taking. You’ll already know that Nike was first to market. Now, weirdly those first knitted shoes that were a bit shit are incredibly valuable. Funny eh?

Reid Hoffman, LinkedIn founder brilliantly captured this thought: “If you are not embarrassed by the first version of your product, you’ve launched too late."

Clearly these characteristics are nothing without a good idea and great talent. But don’t go thinking that the grass is greener elsewhere. You have talent and ideas in your organisation. But they’re easy to overlook as they are so close. We work with you to find these ideas, free them, accelerate them, and turn them into start-up fuel, ready to change what you do.